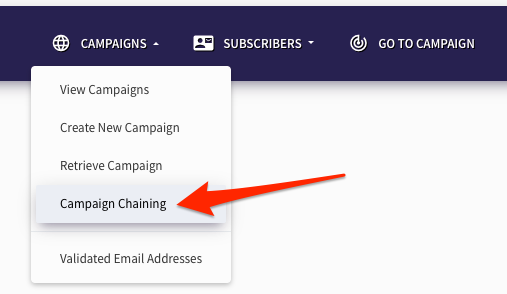 When you need a way to automatically move subscribers from one Campaign to another, or to give subscribers an option to move to a new Campaign, Chaining is the way to get it done.

There are three types of Chains used in TrafficWave.net AutoResponders.

When a subscriber (using the same email address) subscribes to one of your AutoResopnder Campaigns, they are automatically removed from a different Campaign. For example:

Action chains are a special form of Campaign Chaining, where a subscriber can quickly subscribe to a different Campaign of yours by clicking a special link that appears in an AutoResponder Letter.

For example, you have created a separate opportunity that you want to share with your subscriber base, and want to see who will be interested. Your workflow could be as follows:

Any subscriber clicking on the Action Chain link appearing in that letter will be automatically subscribed to the new Campaign.

Of course, for advanced functionality, an Action Chain could also be combined with a Subscription Chain to remove that subscriber from the original Campaign...

Action Chains are created in the letter editor. Select the text, image, or button you wish to use as a link, then select AR Action Chains from the toolbar menu

Warning about Chaining and Subscriber Tokens

There are two potential issues that should be considered when using Chaining:

1. While Standard Tokens (name, address, phone, etc...) are considered global, and will be available when a subscriber is moved to a new Campaign, if the Target Campaign has required token data that was not present already, it will be missing!!

2. Custom Tokens are Campaign Specific and will not transfer.